- We look at ped improvements in the Lloyd District.

- What does research show us about what makes people walk?

- The Assn of Ped and Bike Professionals meets in Portland.

Set on the grounds of a preserved Roman hippodrome, a group of performing legionnaires, gladiators and charioteers try to hang on to Jordan's ancient past.  Jerash is ancient Gerasa, a prosperous city of the Roman Empire.  But as tourism continues to decline in the Middle East, the performers are faced with the harsh reality that each show may be their last.  The documentary short “The Battle of Jerash” takes you for a bizarre ride in a place you never thought would feel the effects of its tumultuous region.

Produced in 2019 by Archaeological Legacy Institute 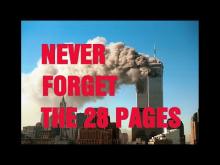 On this the January 2020 episode, Connie Bryan kicks off the New Year with a bang by delving into the evidence in the originally redacted "28 pages" of the Joint Congressional Committee's investigation into 9/11, finally unclassified by Obama a year before leaving office, that shows the Saudi Government financed the attacks.

John Garamendi (D) is one of three candidates running for the Congressional 3rd District in California and is the incumbent. Each candidate was invited to make a presentation in the DMA studio under identical conditions. Statements are up to five minutes in length, and have not been edited.

topics discussed include: how the devastation of Liberia's two civil wars has created the current demographic and economic circumstances, those circumstances, what Save More Kids does, and visions for Liberia's future.

Alex Silva-Sadder hosts Quanuquanei A. Karmue, Author of Witness: A Civil War thorough the Eyes of a Child.

topics discussed include: the history of Liberia, the two Liberian civil wars, Quanuquanei's experiences of the war as an eight year old child, the violence and devastation wrought by the war.

Sci-Fi Journal for December 2019 with hosts James Hinsey, Ian Kingston, Maddy Kingston, Marc Morisseau, and Calvin Watts III. Ian does Popcorn Previews with trailers for ''The Invisible Man'' and ''Onward''. Marc does Toob News covering all of our favorite and new television shows. Maddy does Books and Board Games features the game ''Pictures''. The Sci-Fi Journal crew attended Rhode Island Comic Con that took place at the Rhode Island Convention Center, the Dunkins Donut Center and the Omni Hotel in November. Maddy interviews Nathan of PixelWho.